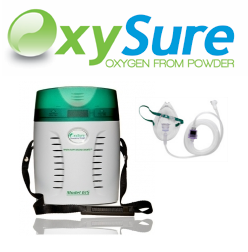 OxySure Systems, Inc. (OTCBB: OXYS), a medical technology company focused on the design, manufacture and distribution of specialty medical and respiratory solutions, has developed a portable emergency oxygen system for lay person use that could prevent oxygen-related damage that can occur during medical emergencies.

The unfortunate death of actor Michael Clarke Duncan highlights the need for portable emergency oxygen systems like these, not only in the home, but also at schools and workplaces where cardiac arrests and other medical emergencies can occur.

Michael Clarke Duncan passed away at the age of 54 on September 3, 2012. The actor, famous for his roles in Armageddon and The Green Mile, never fully recovered from a cardiac arrest that he suffered at his home in Los Angeles, California back in July.

TMZ reports that it was the dramatic minutes Michael Clarke Duncan was left without oxygen that damaged his organs so badly he could never recover. His fiancé had arrived in time to resuscitate him, but with approximately five minutes passing before oxygen was delivered, key organs were damaged by the lack of oxygen.

While the actor was able to receive top-of-the-line medical care for nearly two months, that care was not able to overcome the lack of oxygen he experienced during those precious few minutes immediately following the heart attack, and eventually his body’s vital organs shut down from the damage.

OxySure has developed a unique technology that could enable better medical outcomes in these situations.

The company’s portable emergency oxygen system – called the OxySure Model 615 – generates medical grade oxygen on demand without compressed tanks. Instead, the system generates oxygen from two dry, inert, and non-hazardous powders that can be safely stored.

This means that unlike traditional compressed oxygen, the technology can be safely used by a layperson during any respiratory or cardiac emergency, much like a fire extinguisher during a fire emergency. Users simply put on the mask and turn a knob to begin the flow of oxygen. Where incidents involve cardiac arrest – the leading cause in death in the US – the OxySure product is used post-resuscitation, in accordance with clinical guidelines. OxySure is cleared by the Food & Drug Administration for over the counter purchase, and has been used in hundreds of saves since its launch recently.

Bridging the Gap during Emergencies

A study by USA Today found that the gap between the onset of an emergency and the arrival of first responders can be between six and fifteen minutes. But unfortunately, it’s the first five minutes of an emergency that can cause permanent damage to the brain cells and vital organs. Therefore, it is imperative that medical oxygen be immediately and readily available and accessible. OxySure allows for this to happen, because of the safety and the fact that there is no training required to operate the unit.

And just like an AED or fire extinguisher, and most often positioned right next to them, OxySure can be placed in public and private areas where an emergency may occur, including in homes, schools and workplaces.

To learn more about OxySure Systems and its Model 615, please see the following resource: