Stocks Struggle for a Reason to Move on Tuesday 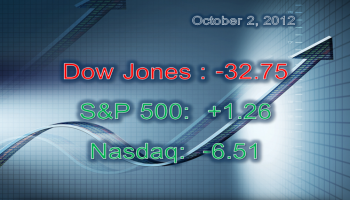 American stocks were mixed with the Dow edging lower and the S&P 500 and Nasdaq squeaking ahead on Tuesday as a lack of conviction kept investors on the sidelines. Sentiment is torn ahead of quarterly reports starting to flow in and the euro zone’s financial turmoil as Spain is in focus in need of a bailout package.

Shares of Cell Therapeutics closed up, albeit well off highs, after the drug maker said that its Opaxio received orphan drug designation from the Food and Drug Administration as a potential treatment for a form of malignant brain cancer.

Analysts say that while a major piece of economic news, such as Friday”s employment report from the U.S. Labor Department, or progress in Europe could bring investors back into the market, some say that even those events might not be enough.

Shares of ArQule took a nosedive after it and Japanese partner Daiichi Sankyo Co. said that they would be discontinuing a late-stage clinical trial on a new drug candidate for non-small cell lung cancer after an independent review committee decided it probably wouldn’t increase overall survival rates.

Shares of MetroPCS”s surged nearly 18% after Deutsche Telekom confirmed it was in talks with the struggling wireless carrier about possibly merging with its T-Mobile USA unit.

Zillow”s stock lost ground after the Securities and Exchange Commission released a letter that questioned why the real-estate site didn”t disclose certain sales data and updated information about its accounting methods.

Shares of clothing retailer Express sank more than 22% in price after the company lowered its fiscal third-quarter expectations.

The price on the benchmark 10-year U.S. Treasury gained back lost ground, lowering yields to 1.61% from Monday”s 1.62%. Treasury prices and yields move in opposite directions.