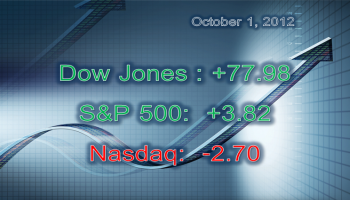 A rally on Wall Street lost steam Monday afternoon following comments from Federal Reserve chairman Ben Bernanke. Stocks had started the day strong as data from the Institute for Supply Management showed that its manufacturing index climbed into expansion territory for the first time after three straight months of contraction. Traders also found solace in words from Charles Evans, president of the Federal Reserve Bank of Chicago, who praised the Fed’s initiation of QE3 in an interview with CNBC.

Data from overseas stymied sentiment to a degree and kept traders cautious. Sentiment in the business sector of Japan further deteriorated and the Chinese economy continues to show stubborn growth. Japan’s quarterly Takan survey registered a negative 3 for the latest quarter compared to a negative 1 reading in June. Readings below zero indicates that there are more pessimists than optimists about business conditions improving at large manufacturers.

Further adding to overseas negativity, Eurostat, the European Union’s statistical office, reported that the unemployment rate across the 17-country euro zone hit a record 11.4 percent in August. Technically, there was no increase, as the agency revised its June and July figures upwardly to 11.4 percent from 11.2% and 11.3%, respectively, which were both record highs. Compared to August 2011, the 2012 figure is 1.2 points higher.

Shares of Netflix rose after a well-known hedge fund manager said that the company is due for an Amazon-style ride over the next decade. Speaking at the Value Investing Congress in New York Monday, the same expert also made a case for Berkshire Hathaway, which he also touted at last year”s conference.

Shares of Ceradyne surged 43% after 3M announced it would buy the ceramic components maker for $860 million U.S.

The Fed chief said the economy “simply has not been growing fast enough recently to make significant progress in bringing down unemployment.” The unemployment rate has been stuck just above 8% since the start of the year.

On the economic calendar, the Institute for Supply Management’s manufacturing index, a survey of purchasing managers, came in at 51.5 for September, marking the first expansion in the U.S. manufacturing sector in four months.

The price on the benchmark 10-year U.S. Treasury gained, lowering yields to 1.62% from Friday’s 1.64%. Treasury prices and yields move in opposite directions.