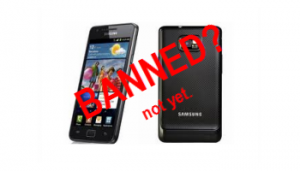 After winning its patent infringement case against Samsung last Friday, Apple (NASDAQ: AAPL) has now come right back to the courts asking for a preliminary injunction against eight Samsung smartphones that it wants pulled from shelves and banned from sales.  The case, which was decided by a California jury verdict on August 24 after a month-long battle, said that Samsung had infringed upon Apple’s intellectual property for a variety of technologies, including double-tap zooming and scrolling.  Apple said in the lawsuit that Samsung had “slavishly copied” its iPhone and iPads.

Samsung had filed a counterclaim related to its wireless technology that it felt Apple used, but the unanimous decision by the jury in Apple’s favor rejected those allegations.

The judge awarded more than $1 billion to Apple in damages.

Samsung has vowed to challenge the decision all the way to the Supreme Court if necessary, saying it will fight the decision with “all necessary measures.”  As that war wages on, probably before a Washington D.C. court specializing in patent appeals, the verdicts will certainly have the eyes of other major manufacturers and Apple rivals, including Google, a partner of Samsung.  If Apple wins throughout, it could open the door for its arsenal of patents to lead to future cases against Android products and other competitors in the smartphone and tablet markets.

All tallied, the case involved 28 Samsung devices, but the injunction that Apple is immediately seeking for a sales ban only targets eight of the devices that Apple says present an “immediate, ongoing irreparable harm” to the world’s biggest public company.

Those listed by Apple accounted for $1.3 billion in sales for Samsung from the beginning of the year through June and include:

The patent infringements for those eight devices accounted for nearly half of the $1.05 billion awarded to Apple in damages.  The Galaxy S 4G was found to infringe upon the most Apple patents, with seven in total.  Three were related to utility patents, two for design and two claims of trade dress.

For the Samsung faithful, the good news is that the court case did not include the company’s latest flagship products of the Galaxy Note and Galaxy S III.

A ruling on the sales ban is expected to come from the court on September 20.