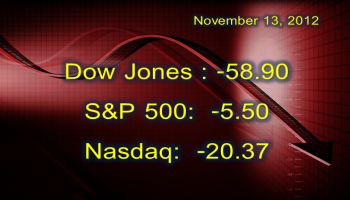 Wall Street was lower again on Tuesday while traders fretted over a delay in organizing a crucial installment of bailout money for Greece and the approaching “fiscal cliff” in the United States.

Lawmakers are trying to strike a deal that prevents the onset of sharp spending cuts and tax increases in January. President Obama plans to meet with union leaders on Tuesday, a number of business leaders on Wednesday and then Congressional leaders on Friday.

Windows chief Steven Sinofsky, heir apparent to Microsoft CEO Steve Ballmer, left the company late Monday. Sinofsky had been at Microsoft since 1989, trusted with overseeing many of the company’s core products — including Office and the recent Windows 8 debut.

Shares of Dow component Home Depot rose after the company beat sales and earnings forecasts. The nation’s largest homebuilding supply retailer raised its guidance for the current quarter, and said it’s seeing a beginning in the “healing of the housing market.”

Meanwhile, Monster Beverage shares were up 2% after the company announced plans to repurchase up to $250 million U.S. worth of its own common stock.

Saks reported earnings in line with forecasts but fell short on revenue. The retailer lowered its sales guidance for the fourth quarter, citing disruptions from Hurricane Sandy.

Shares of TJX rose after the parent of T.J. Maxx and Marshalls reported that third-quarter sales and earnings rose.

After the bell, Cisco Systems will release its results.

Economically speaking, the Treasury Department reported a larger-than-expected deficit of $119.9 billion U.S. for October, compared with an expected shortfall of $113 billion U.S.

The price on the benchmark 10-year U.S. Treasury gained ground early Tuesday, lowering yields to 1.59% from Friday’s 1.61%. Treasury prices and yields move in opposite directions.