Equites Plummet Again on Wednesday, Now Down 5 Percent Since Election 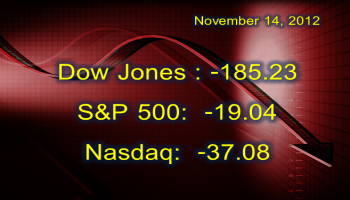 U.S. stocks fell more than 1 percent Wednesday as fears of turmoil in the Middle East added to ongoing concerns about a fiscal showdown in the United States.  In the six trading days since the presidential election, the Dow Jones has lost nearly 700 points, or about 5 percent.

Stocks have been under pressure this month as concerns about the fiscal cliff have dominated the market following the election of President Obama.

Most investors expect a compromise, but they are not taking any chances until Obama and Republicans in Congress reach a deal to avert the onset of automatic tax hikes and spending cuts that could push the economy into recession.

Shares of Teavana surged 52% after Starbucks announced plans to buy the tea company for $620 million in cash. Starbucks stock was down about 2%.

Facebook shares rose more than 12% even though more than 800 million shares became available to be sold. Like many initial public offerings, Facebook’s May 18 debut included a “lockup” agreement that requires some shareholders from selling for a certain period.

On Wednesday, early employees and investors got their first chance to sell about 773 million shares, as well as another 31 million restricted stock units.

Shares of retailer Abercrombie & Fitch shot up 32% after the company reported sales and earnings that towered over expectations and raised its full-year earnings guidance above even the most bullish forecasts.

On the economic board, the U.S. government reported retail sales fell 0.3% in October, citing a negative impact from Superstorm Sandy. It was slightly worse than the 0.2% decline forecast by economists.

Meanwhile, prices at the wholesale level decreased 0.2%, according to the Producer Price Index report. They had been expected to increase by 0.1%, led by higher energy and food prices.

The price on the benchmark 10-year U.S. Treasury gained in the afternoon, lowering yields back to Tuesday’s 1.59%. Treasury prices and yields move in opposite directions.