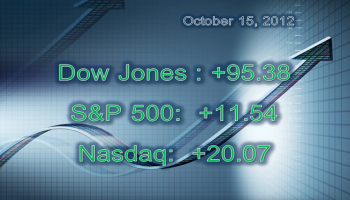 Bank stocks were among the best performers after Citigroup reported third-quarter earnings that topped analysts’ forecasts. Shares of Citi rose about 4%. Bank of America and JPMorgan were also higher.

American International Group was the best insurance play today with a 1.6% advance.

Shares of Cablevision paced S&P 500 performers with a 4.85% climb, riding the news from last week that it is considering selling Bresnan Broadband Holdings LLC, a provider of TV and internet services.

On the other side of the coin, shares of MetroPCS Communications lead the S&P 500 laggards with a 4.9% decline as investors realize that the company – which is in the midst of a merger itself with T-Mobile – will have to compete with a stronger Sprint Nextel now that Japan’s Softbank is taking a major position in the company.

Sprint agreed to sell a 70 percent stake of itself to Softbank Corp. in a deal valued at $20.1 billion. Clearwire Corp., who has Sprint as a large shareholder, continued to leg upward on the news.

Among the blue chips reporting results this week are Intel, Bank of America, IBM and Johnson & Johnson

Shares of rival drug maker Abbott rose after it announced upbeat results for an initial study of its treatment of hepatitis C.

Yahoo Inc. saw its shares demur 1.1% after Stifel Nicolaus lowered its Q3 earnings estimates for the online media company from 28 cents per share to 23 cents per share.

Texas Instruments shares gained on speculation that Amazon is in talks to buy its smartphone microchip business.

Shares of Workday, which made a strong NYSE debut last week, kept their upward trajectory by rising another 6.67% to $51.94.

Shares of toy maker Hasbro fell more than 2% after analysts at Goldman Sachs downgraded the stock to sell. Goldman cited a sharp decline in the amount of money consumers spend on toys and games. Shares of rival toy company Mattel sympathetically fell as well.

Economically speaking, retail sales jumped 1.1% in September, boosted by higher gas prices and electronic sales, according to the U.S. Census Bureau. That’s higher than the 0.7% rise expected by analysts.

Overseas, a report Monday showed that inflation in China slowed in September. Chinese consumers paid 1.9% more for goods in September than they did a year earlier, the government’s National Bureau of Statistics reported. That’s down from a 2% increase in August.

The price of the benchmark 10-year U.S. Treasury was unchanged on the day, keeping the yield at Friday’s 1.66%.